This year, fans attending Miami Heat games at FTX Arena will have a chance to experience custom-jersey creation thanks to a collaboration between the team and Stahls’. The two worked together to create a one-of-a-kind jersey lab located within the stadium where attendees can step up to a kiosk, create a custom jersey, and watch it being printed right before their eyes.

Vicki Nardini, senior director of commercial brand marketing at Stahls’, has been involved in the project from the beginning along with her colleagues Carl Agosta, VP of commercial sales and licensing, and Scott Vallee, executive creative director. “Conversations started last April about the project,” she says. “We’ve had a great relationship with them for a number of years, and they wanted to do something different and create a new retail experience in their stadium store.” Launched during a Midnight Madness event at the start of the season, the lab was opened up at midnight to fans, an event Nardini says was well-attended. 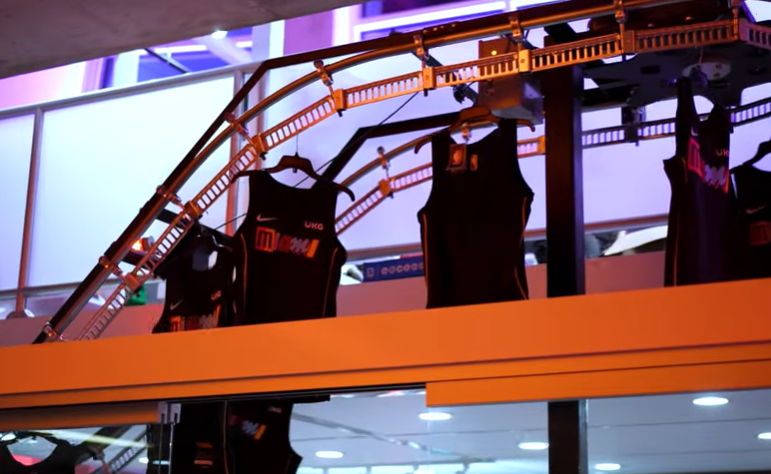 The approximately 20’ X 30’ space resides within the stadium and required everyone from the Miami Heat operations team to its facilities team and even the city to build. The result is a space where a family can walk up to a kiosk, input their custom information, and watch the jersey creation happen. Nardini says you can even stand above the lab and watch the experience from the second level.

“There were a lot of different ideas thrown around,” she says of the process. “We have a kiosk system installed in several stadiums across the country that allow customers to customize jerseys [onsite], and they liked the concept … They wanted to pick that up with a Disney-like experience.”

Nardini notes that Stahls’ provided the software and kiosk system, and of course continues to provide the components like the jersey numbers. “Stahls’ will continue to share support if they want to enhance the experience [in the future],” she adds.

“Midnight Madness was probably the coolest part,” she finishes. “Their customers were really wowed by the engagement of the kiosk, just to use technology in a way to customize something they want to support the local team.”

All DTF is Not Created Equal