UPDATE: How Apparel Brands Are Responding to Russia’s Invasion of Ukraine

The Russian invasion of Ukraine is on everyone’s mind. The difficult situation not only has people talking, but many are also taking action.

Major companies, including Apple, Disney, Ford, Exxon, and others are dialing back operations in Russia in response to the invasion. This has also carried over into the world of apparel, with TJX, the parent company of stores like T.J. Maxx and Marshalls, most recently announcing its commitment to divesting from Russian interests in protest of the invasion, according to a press release on WCVB.

TJX joins the many brands in the apparel space that are severing ties with Russia. H&M Group, one of the world’s largest retailers in the fashion segment, announced on March 2nd that it was temporarily pausing all sales in Russia, according to Teen Vogue. Multiple reports of other companies making similar moves continue to flow in.

On March 1st, Reuters reported that adidas announced the suspension of its partnership with the Russian Football Union with immediate effect, joining FIFA and UEFA, who suspended Russian clubs and national teams from all competitions until further notice. Nike has yet to comment on the conflict at the time of writing; however, the company did halt online sales in its Russian website, according to The Wall Street Journal.

But the invasion has also sparked a response on another level, with many organizations and people stepping up to provide help and relief, including many in the decorated apparel and promotional products industries.

Polyconcept North America announced that 1% of total March product sales will be donated to Ukrainian refugee relief efforts in Poland. PF Concept, the Netherlands-based European division of PCNA’s parent company Polyconcept, has operations across Europe, including in Poland. The company is also distributing blankets, clothing, and power banks to refugees in Poland.

Apparel decorators are also getting involved. Jessica Tillery founded the Love Unstoppable Movement (L.U.M.) in 2019 as a passion project through All Quality Graphics, her custom merchandising company. L.U.M. is a monthly subscription package that for every subscription, $1 is given to a local charity. This month, they’re taking it one step further and all proceeds will go toward Ukrainian aid, with a special design featuring sunflowers and the word UNITY.

“For us, it’s about utilizing our resources to make a difference, so we said, how can we help,” Tillery says. “That’s the goal, to support when we can and to spread love. We’re sharing the symbolism the sunflower brings to the Ukrainian population, representing resistance, unity, and hope. We’re playing off the whole sunflower thing and the symbolism behind that. We might not be adidas or Nike, but we can still spread love.” Also included in this month’s subscription package will be sunflower seeds, which Tillery hopes people plant to help spread the message, and serve as a reminder of love, peace, and unity.

Amber Massey, owner of Tshirts for Hope and Apparelist Advisory Board member, is also hoping to offer help. She put out a call on Instagram to connect with graphic designers and artists who had to leave Ukraine and are looking for work. “We can make a difference doing exactly what we do,” Massey says.

Pantone recently shared a post on its LinkedIn page sharing its efforts: 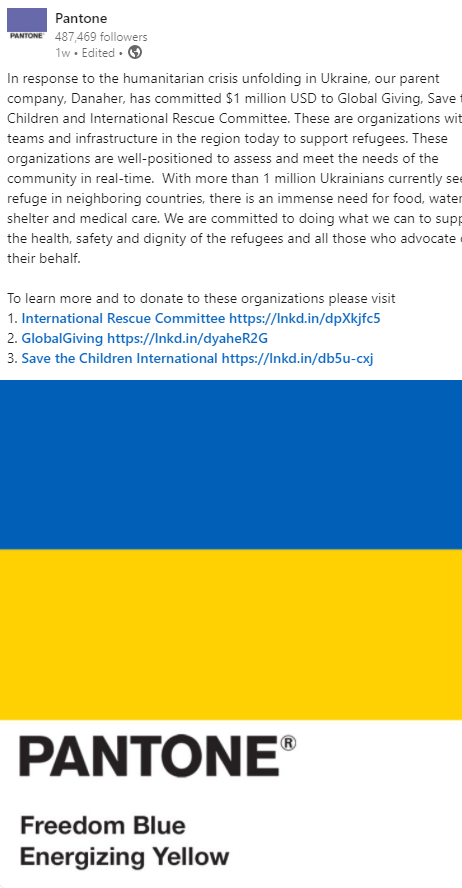 InkSoft has also stepped up to help. The company is now offering a free fundraising marketing kit to help those interested in setting up fundraising campaigns. Its latest blog post also outlines tips for fundraising as well as information on organizations for you to support.

Many apparel decorating shops, small and large, across the nation continue to set up fundraisers. Logo Hub, located in Christiansburg, Virginia, is now “printing for a purpose.” The shop is printing T-shirts that not only feature a supportive message, but 100% of the proceeds are going toward relief efforts. According to a press release, Logo Hub teamed up with the Salvation Army to ensure all proceeds go straight to Ukraine and those helping refugees.

Luxury brands are also pulling their clothing from access throughout Russia. Chanel announces that it is refusing to sell to Russians unless they can prove they live outside the country and declare they will not take purchases to Russia. The brand has gone so far as requiring some customers purchasing items in other countries to sign a Chanel-branded document stating that their main residence is not in Russia and that they won’t take purchases to Russia.

A representative for Chanel told Board of Fashion that the brand is complying with trade sanction laws. The restrictions, announced on March 15, prohibit the “[sale], supply, transfer or export, directly or indirectly, [of] luxury goods … to any natural or legal person, entity or body in Russia or for use in Russia.”

This is an ongoing situation, and Apparelist will provide updates as they become available. Anyone who wants to help is encouraged to thoroughly research vetted companies and organizations.

Women in the Industry: Chanel Stovall on How to Keep Climbing