Fanatics Teams Up With Jay-Z, Meek Mill, and Others to Purchase Long-Time Sports Apparel Company

Fanatics has teamed up with celebrities such as Jay-Z, Meek Mill, and others to acquire 118-year-old Mitchell & Ness, known for its nostalgic jersey replicas and streetwear. According to a news report on CNBC, Fanatics will own 75% of Mitchell & Ness, with the rest in the hands of the celebrity group. 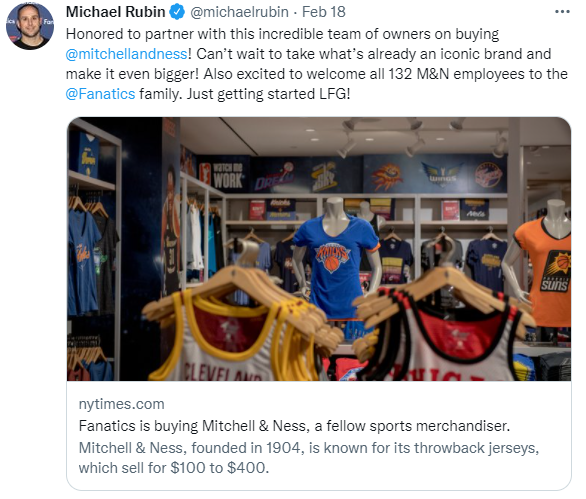 Mitchell & Ness first opened its doors in 1904 and sells sports apparel ranging from $100 to $400. The new acquisition from the previous owners (Juggernaut Capital Partners) will not cause 132 employees to lose their jobs, assured Michael Rubin, founder and CEO of Fanatics, in a press release. According to that same release, Rubin will employ a business model similar to the Fanatics platform, which will include more global recognition and expanding the company’s product offering.

“I’m incredibly excited for Fanatics to partner with this incredible group of innovative owners to build upon the company’s already strong business that has kept the brand culturally relevant for more than 100 years,” Rubin said in an official statement.

In another interview, also featured on the CNBC site, Rubin talked about the growth of retro apparel and the booming business Mitchell & Ness has experienced in the last several years. “Retro products, and this really cool type of culture wear, is very in-trend right now,” he stated. He went on to discuss the momentum in sports and athletic wear and how the merchandise associated with leagues like the NFL will continue to grow in popularity.

Mergers and acquisitions continue to be a theme for the company, who earlier this year . CNBC stated that the deal values Mitchell & Ness at $250 million, according to sources familiar with the matter. Those same sources added that the company pulled in $350 million in sales and $70 million in profit last year.